We have a lot of upcoming travel, some of which may include a funeral. My navy suit is too big (yippee!). My mom pressured me to buy a new outfit at K-mart, should we need to leave unexpectedly.

I chose a two-piece black "slinky knit" outfit that I could dress up with pearls and throw in the suitcase without ironing. I never buy new clothes, so I was shocked at the K-mart price: $35! Two wearings later, the new fabric developed more frays and pulls than an old sweater. I saved my receipt, and K-mart's store manager was understanding enough to refund my money. 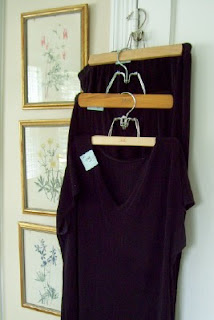 Today I found this similar--but higher quality--outfit by Chico's: v-neck top, straight skirt, and slacks. After the K-mart debacle, I knew that $9.99 was a bargain. The K-mart outfit was a knock-off of Chico's, in the first place! No one else had scooped up my outfit because it was mistakenly tagged "3X". Chico's uses 1, 2 and 3's for sizing. 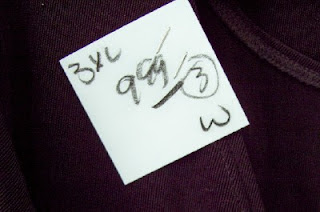 I already had a pale blue top of the same fabric. Now I'll have 2 outfits for less than 1/3 the cost of K-mart!
Posted by Meredith at 1:37 PM

Terrific score on the Chico's outfit! It looks basic enough to turn into many combinations.

And thanks for the link to Chicos. I have picked up some of their clothes at my thrift store, and I was puzzled about their sizes. Now, sigh, I know to look for a 3.5.

BTW, is the Chico's outfit that 'traveler' fabric that doesn't wrinkle? Great stuff for a trip!

Yes, Walmart/KMart are not ALWAYS a bargain. You have to be careful in there, just like in a thrift shop.

I was thinking of the combinations:

So, 4 combinations. If you had one more top that went with both bottoms, you'd be up to 6 combinations ... using just 5 pieces.

My mom loves Chicos, and they just opened one here in Binghamton NY-but I doubt I'll ever buy anything there. . . but maybe in a few years a bunch of it will start trickling down to the thrift stores. . . .

Great deal! I'm glad you were able to return the other outfit. That is why I never buy clothes at discount retailers. The quality just doesn't hold up! I'm extremely fortunate in that there is a Talbot's outlet in my town. I am able to buy some amazingly expensive and high-quality clothes for dirt cheap. They even carry my shoe size, so I no longer have to shop at expensive specialty stores for dress shoes!

Great bargain hunting! This reminds me of the time a woman in our laundry room was exclaiming about the "deal" she got on T-shirts at one of the numerous "dollar" stores around here. They're not really dollar stores - they just have a lot of cheaply made clothing that they sell for cheap prices. She was all excited about paying $4 (or something) per shirt and I just kind of nodded, thinking "wonder how long 'til they shrink or fray or otherwise fall apart?" I would much rather take my $4 into a thrift store and spend it on a name brand that I KNOW will be quality and will wear for a while rather than waste it in these cheapy stores.

Your shopping for dress clothes reminds me that I need to pick up something for my SIL's wedding in a week and a half. :S I was thinking Target (they don't tend to lack in quality there!), but I might give our thrift store a try first, sans toddler, though.

I love the bargains you find!

Yes, Jora, it's that rayon knit Traveler's fabric. It wears phenomenally well for travel. You can wash it in a bathtub and hang dry overnight if you need to.

Now that I investigated the web site a little, I have a better idea what sizes/styles to find thrifting.

What a great find! Great job! I love pieces like that because they are so versatile and they require no ironing. What is not to love about that?

Great job! :) I agree with the first writer... Walmart and Kmart aren't always cheaper! :) They'll get ya!

Chico's sizing is pretty weird. I weigh 140 (and much in my chest) and a Travelers size 0 -- that's right, a size zero -- pretty much swims on me. This is the case with almost all that type clothing, including JoStar and Slinky.

This is great fabric and sheds pet fur and is easy to care for.

I have virtually never bought Chico's retail. For the first few years, I bought only at Thrift Stores, then expanded to buying on eBay.

Be advised about their V-necks though: for some reason, they changed the fabric and doubled it up, so there are two layers of material in the front and 1/3 of the back. I feel like I'm wrapped in cellophane when I wear these as my body isn't able to breathe under all that polyester knit.

Often that fabric is different (smoother) too, and wrinkles and stains easily. Again, I now stay away from their V-necks.

Also, some sweaters are for skinny arms.

I LOVE Chico's but their sizes are a bit freaky and inconsistent and the fabrics can be quirky.