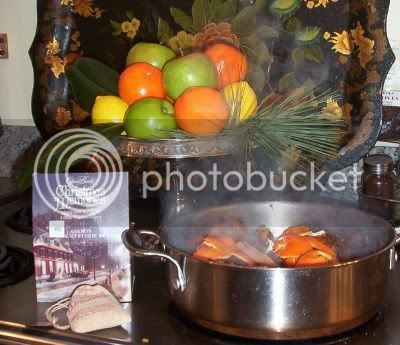 Q: Can you elaborate on the heavenly scents ... it sounds delicious but how much do I simmer of what in how much water ... or is it kind of like a mix and match type thing??? --Amber

I love holiday smells, but I don't like to keep buying tins of mulling spices. (Pictured is a box of spice sachets I just found at the thrift store for 50 cents.)

You can make your own simmering scents for pennies on the dollar. Anything goes!

This year I bought spices in bulk from a Mennonite store, where a bag of 100 whole cloves cost 99 cents. Then we throw our apple and orange peels in the pot as they accumulate.

Sprinkle with nutmeg, powdered cinnamon or a cinnamon stick, throw in a few cloves, and fill the pot 2/3 full of water. Bring to a boil, then turn the heat down to a low simmer.

If you prefer to use less electricity, you can simmer in a crockpot with the top removed. I turn off the heat after about 20 minutes of simmering, yet the scent lingers for hours.

Don't empty your pot after each use. Keep adding water, peels, and spices as many days as you like.

Never let the pot run dry. Use an old pot if you have one, as the mixture leaves a hard-t0-scrub residue.
Posted by Meredith at 11:08 AM

I know fresh fruit is healthy, but it's kind of expensive for a family of six. Where do you find the chepest fruit?

We have been going through a tangerine eating phase here and I told my husband to save the peelings after reading this post.:-) It smells great! I have made this for several years, but only used apples and spices. Thanks for the frugal ideas. By the way, congratulations on the award. I love your blog!

Thanks, Mary Ann! We are enjoying the fresh tangerines here, too.

Meredith, First let me thank you for posting over at my blog to correct my "farewell blogger" issue LOL I appreciate it! I'm going to edit that post so it doesn't say "farewell" anymore. I decided to check out your blog and GREAT stuff! Thank you for posting on mine and I will share yours with my readers (if I have any LOL)
Take care and I absolutely love this blog!
Nicole

And we are enjoying naval oranges from Aldi's. I even got my husband into getting them on the stove...and I'm running out of cinnamon sticks. O, of course, we enjoy the bananas...seems like those don't make good potpourri, though. HAHA

Your fruit arrangement is beautiful.

Meridith, you have a great "eye" for still life arrangement.

So glad you posted this and I stumbled across it! :) Our climate is VERY dry and my husband was telling me his mom would simmer pot pourri on the wood stove when he was a kid...so we just started saving orange and tangerine peels about 3 days ago, and now I have an idea how to put it together. Thanks!