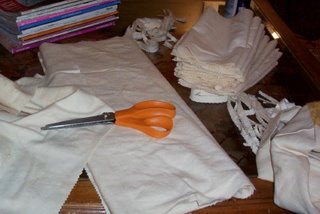 Can you recycle cloth even if you don't sew, knit, quilt, hook, or braid?
Yes! Pinking shears can be the frugal gal's best friend. Before I acquired a sharp pair, I let so many missed opportunities slip by...daunted by the thought of hemming old fabric into new uses. Pinking shears are so quick and easy to use, you'll be scouring your house for scraps before you know it.
Right now I'm drowning in remnants. Tonight I found the end of a curtain I'd trimmed two houses ago. I bought the original valance for $5 at Goodwill Salvage, then used most of it for a skirted buffet. Apparently I chucked the remainder in a box, where it hid for (gulp) years. Backed with ivory linen and interlined with woolly soft flannel, the scrap was too good to throw away. I pulled out my trusty pinking shears. In the space of one television show, I cut twenty-five beautiful new dustcloths. Soft, clean, and neatly folded, they might even be pretty enough for a gift. Each new box I unpack begets another project--which is why I might never finish. 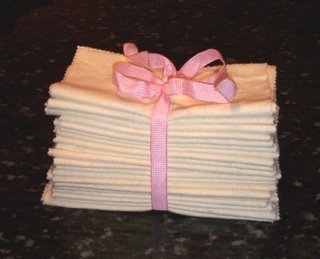 Still, it makes me happy to see that $5 stretched a LONG way!

I'm think I'm finally sold on pinking shears. It's a purchase that I've been "frugally" putting off for many years.
I've watched and never found a used pair, maybe because nobody ever wants to get rid of them?

I think they are a purchase that is worth it and what a lovely gift idea. Maybe I would dust more if I used pretty cloths instead of rags...bears pondering anyway.

Donna, these will become rags pretty quickly! But it's nice to start with fresh ones every once in a while. Even nicer to start when they are free!

Kim, I had to break down and buy new, too. Walmart had a $5 pair, which was constantly out of stock in the craft department. I used a JoAnn 50% off coupon to buy their cheapest pair of Fiskars. My sewing friends tell me the only way to keep them sharp is never, never to cut paper with them!

Great idea...they do look pretty.
I just picked up Don Aslett's "Is There Life After Housework" at the thriftstore for a quarter and followed one of his ideas for cleaning cloths made from towels (mine weren't from Turkey, but oh well :) I cut them, and sewed the sides to make a tube (with folding and flipping you get 8 cleaning surfaces per cloth) and since I used the pinking shears didn't worry about hemming them.
I truly love the satisfaction of reusing something that still has life in it.
Thanks for the book recommend btw, we'll read it online tomorrow. :)

Have I told you how grateful I am for your blog and wonderful ideas? I have an old (extremely old) pair of pinking shears from my mom. They were probably her mom's because they don't cut well anymore. I've tried cheating making curtains for the kitchen with them. For Christmas I am (hopefully) getting a few small useful gifts, and pinking shears are on the list along with a tiny hole punch so far. :)

Great idea! I love reusing cloth (or any other items to) but have a huge pile of items waiting to hem....I'll have to get my self some pinking shears.