We made it back from the funeral. How do you Atlantans ever survive that traffic? The whole thing was delayed an extra day because of a family member's bungee jumping accident. Yes, a bungee jumping accident. My husband summed it up when he asked, "Just what was she thinking as she dove off that cliff?"
Both children acted as well as could be expected, following a nine-hour car trip and being under constant observation by all manner of elderly relatives. My two were the descedent's only great-grandchildren; actually, the only children in my husband's family. The little baby met her paternal grandmother and great-grandmother for the first time. 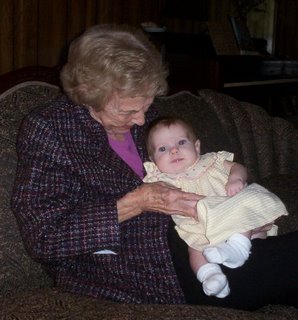 My son perfected the handshake technique a politician recently taught him. ("Instead of giving them five fingers, give 'em seven: five firm fingers and two eyes.") At the visitation, he asked his uncle to take him over for a closer look at the sarcophagus.

At least their grandmother knew they aren't totally without culture.
Posted by Meredith at 3:21 PM

How did she get hurt on the bungee jump?

Apparently she hit the water the wrong way. They thought she had broken her back, but after being rushed back to the States, found that she was only bruised.

Who goes to a destination wedding when you know someone's on their deathbed, anyway?

Maybe she wanted to drop in on the dearly departed.

Thanks for posting Andrew's comments. He made my day!!!

what a precious photo of the two ladies : )

First, my sympathies to your family for your loss.

Second, SARCOPHAGUS?!? That is hil.ar.i.ous.

Laughing so hard over here. Love the tip the politician gave your boy about handshakes. Most kids these days could use lessons like that in simple courtesy.

And your baby girl is gorgeous.

What a wonderful photo

I guess it depends on whose destination wedding it is.

My sister starting her new life together versus a grandmother ending her life -- I'd go to the wedding, myself. OTOH we didn't have a close relationship with our grandparents growing up and never did end up going to their funerals. I will spend lots of money to go see an elderly relative while they are alive -- for a funeral? Enh. Life's for the living.

OTOH I wouldn't hold up a funeral expecting people to wait for me to show up either! :)

Hey Meredith. I was telling my husband about the cousin's accident. He said he hopes she bounces back real soon!

I think you guys are having too much fun at the expense of the cousin's accident, LOL.....

How do we Atlantans handle traffic? I for one handle it with a knuckle-whitennig death grip on the steering wheel and a LOT of prayers. Luckily I only usually venture out on weekends which isn't so bad. A month and a half and I miss the calm roads of NE GA.

Glad you guys made it back safe n sound and the picture of the 2 young ladies is precious. Save that for baby girl. It is a treasure!

Tracey, you and your husband crack me up!